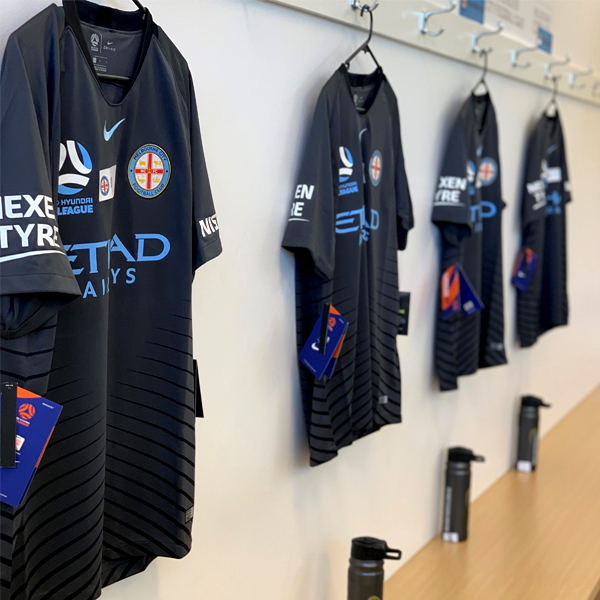 Over the weekend Bulk Nutrients hosted an exclusive training day with Melbourne City FC at City Football Academy in Melbourne.

This training day was opened as a competition by Melbourne City FC and from the entrants, 20 teenagers won access to attend. We also brought with us two star players and their coach from the Hobart United FC who we have been sponsoring for seven years.

The idea was to submerge the avid footballers in the day in the life of a Melbourne City FC player. From entry until exit, attendants were treated as though they were playing for the A-League Club.

The day started with attendants heading to the change-room to get decked out in their Melbourne City FC kit, and then being presented with their Bulk Nutrients gym bag, towel, shaker, drink bottle and HASTA certified supplements from Melbourne City FC players.

Melbourne City FC’s Head of Human Performance, Andrew Mckenzie then presented on how their players train and eat. Proper recovery, nutrition and supplementation is vital to the success of their players.

Following this we presented on the importance of key supplements for sports performance including our HASTA certified products: Pre Workout 101, BCAA Recovery, Electrolyte Plus and HASTA Whey Protein Isolate.

After the presentations, attendants headed on to the pitch where they were provided with some Bulk Nutrients Pre Workout 101 to give them enhanced energy and endurance.

The Melbourne City FC coaches then gave a quick pep talk before attendants hit the pitch for a warm up.

Attendants were out on the pitch for a couple of hours and benefited from Bulk Nutrients Electrolyte Plus and BCAA Recovery at interval breaks to help with rehydration and recovery.

Our Hobart United FC boys Jackson and Moses smashed it on the pitch and had a great time meeting like-minded football enthusiasts.

The day ended with a Bulk Nutrients HASTA Whey Protein Isolate shake and a specifically designed lunch to ensure optimum recovery post training. Attendants were treated to the same meal players have after training made by club nutritionists. This included a high protein source, clean carbs and fresh vegetables.

We were blown away by the scale of the operation at Melbourne City FC. The City Football Academy is state of the art and includes multiple gyms, ice baths and a massage room. The facility even has its own laundry where all Melbourne City FC game day kits and even undies are washed. We particularly loved how the change-rooms are designed in a circle to show all players are equal.

They are also the first A-League Club to have their own separate state of the art training facility for their women’s team.

The facility is decked out in the exact same style and layout as their partner clubs Manchester City FC and New York City FC so even when players are travelling, they still feel at home. This layout was designed by sports psychologists to ensure the players are always feeling and playing their best.

Melbourne City FC believe “Whether you want to be a professional footballer or just maintain a healthy lifestyle, it’s important you’re aware, not just of how you train but also of what you consume. It’s a popular opinion that, no matter how much exercise you do, ‘you can’t out run a bad diet’.”

Therefore, they take their supplementation very seriously and we’re proud to be their official nutrition partner.

Our HASTA certified range provides them with pure, clean supplements to enhance sports performance and recovery which is very important when players are running up to 40km a week as well as engaging in multiple strength and conditioning classes.

Players even have access to a wellness app where they are instructed to monitor the amount of sleep and the amount of times they go to the toilet over night, so upon arriving at the facility in the morning all of their supplements have been individually divided out in relation to what they will need for the day.

Bulk Nutrients has been on-board with Melbourne City FC since early 2018 and we can’t wait to continue this exciting partnership.

We’d like to say a huge thanks to the Melbourne City FC crew for having us along and for all the hard work they put into organizing the training day!