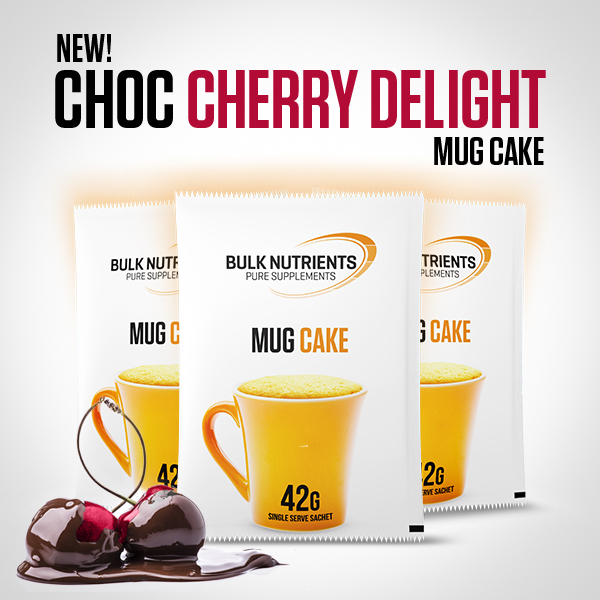 2016 was a big year for all of us at Bulk Nutrients HQ. After we released our first new flavour of the year in February, we got a little excited and we didn’t stop.

We managed to whip out six new flavours in 2016, as well as nine brand spanking new products. We are pretty stoked with what we achieved during the year and we sure hope you all enjoyed the many new editions.

So, join us for a rewind of 2016! We start the year in February, as January is our time for brainstorming and planning our yearly course of action.

The oh so popular Mug Cake returned in February adorning a new flavour, delectable Choc Cherry. As we expected it was even more popular than the Creamy Banana.

Our Mug Cakes are full of protein and can be made in just a minute! They’re a perfect guilt free snack to have after dinner when you’re considering reaching for that chocolate bar.

In March a brand-new protein flavour hit the shelves in WPI and WPC; sweet, sweet Choc Honeycomb! It was a real hit with our staff during testing and once released our fans were equally as impressed. Choc Honeycomb is pure yum and sure to satisfy your sweet tooth.

With the autumn breeze of April came a new product that we had been working on due to the changing demands of our customers, Total Meal Replacement. Ideal for those requiring proper nutrition without the time to cook, namely shift workers and those training late at night. Total Meal Replacement is high in protein, smooth and easy to drink. We released it in both Chocolate and Strawberry with good feedback on both.

We had been eagerly anticipating the release of this new product, a high protein mousse. Our Quick Protein Mousse is the perfect dessert alternative for all of those sweet tooths out there. Initially, we released it in our popular Choc Honeycomb flavour as well as Strawberry, but just recently we added a dreamy Caramel flavour to the mix.

As winter began to cool us all down, we thought there was no better time to release a scrumptious new flavour of Whey Hot. Introducing Vanilla Chai, the spicier of the Whey Hot family. It’s creamy and perfect to have before bed on a winters night. Since its release, Vanilla Chai has become our most popular flavour of the product.

Later in June, we brought out Proviotic, our two in one probiotic and vitamin supplement. Proviotic contains a full spectrum of formulated vitamins and minerals, providing 25 per cent of the recommended daily intake per serve. It also contains a full serve of probiotics to support digestion. Perfect for maintaining your overall health!

By July we knew that you were sick of your morning oats, gluggy from attempts to mix in protein powder. We knew you were after something just as warming but much tastier and simple to make. So our Protein Oats, although a simple concept, were quite revolutionary. In a delicious Brown Sugar cinnamon Flavour, Protein Oats are so quick to make and are designed to keep you going all morning.  The perfect way to start your day.

After its release in 2015, our Protein Matrix+ blend had become so popular that we had to give our beloved Bulk fans a new flavour to enjoy. When brainstorming which should come next we just couldn’t go past the amazing Salted Caramel. Protein Matrix+ competes squarely with the biggest protein brands on the market. It’s perfect post workout and is super creamy, whilst still being easily digestible, woo hoo!

We were feeling especially sweet in August, so much so that we introduced Sweetvia to the Bulk family.  Sweetvia is a natural, low GI sweetener that contains virtually zero calories. It’s perfect for sweetening tea or coffee and is essential for the clean eating kitchen.

A very popular 2016 launch happened in August, Laxogenin. Our Laxogenin Capsules can improve your strength and muscle building abilities by having a positive effect on lean muscle growth, increasing protein synthesis and inhibiting muscle breakdown. They’re also perfect stacked with a Test Booster.

The one you had all been waiting for arrived in September, NO3X 2.0! The original NO3X was incredibly popular, but due to legislative pressures around the ingredient Amp Citrate, we took it off the market and worked on reformulating this pre-workout. We replaced Amp Citrate with DMHA Octodrine which provided great results during testing. NO3X 2.0 provides a great kick when you want to push that little bit harder in the gym.

Salted Caramel, Salted Caramel…Why do we love you so much? In September, we brought out Salted Caramel in our favourite fat burning protein, Thermowhey. Thermowhey is perfect for those dieting and thus looking for a low carb and fat protein powder. Plus, creamy Salted Caramel flavour? It makes you feel like you aren’t on a diet at all!

After a successful release of NO3X 2.0, we introduced a second flavour to the initial Watermelon. This time tangy Lime and wasn’t it a hit? There’s nothing like the kick of lime to match that of NO3X 2.0.

To make up for lost time in November we released a totally different and super exciting product, Max Sleep, the ultimate bedtime buddy. Max Sleep promotes relaxation and recovery, assists with sleep quality and increases growth hormone levels. It’s perfect for those long and busy working weeks where sleep comes at a premium. We all love Max Sleep here at Bulk HQ and if you’re yet to try it, you should get on the bandwagon, we’re sure you’ll like it.

So, what lies ahead for Bulk Nutrients? We are a creative bunch with some fresh ideas and so you never really know what could be in store for the new year, but we already know it’ll be great. You’ll just have to wait and see, so make sure you stay tuned!