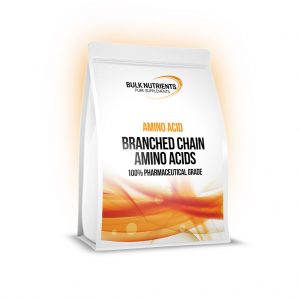 Between 5 – 20 grams during training and/or with meals

BCAAs are best used with:

BCAAs are the Essential Aminos of Leucine, Isoleucine, and Valine. These essential BCAAs are of special importance for athletes because they are metabolised in the muscle, rather than in the liver and make up one third of Muscle Protein. They play an important role in Protein Synthesis, Anabolism and Anti-Catabolism. Without adequate amounts of BCAAs muscle cells won’t heal as fast and they won’t grow. Most BCAA users report an immediate improvement in performance during extended periods of exercise, most likely due to better recovery potential. Consumed for several months, a diet high in BCAAs will reduce the incidence of infection by boosting immunity. You can also expect faster muscle growth during periods of intense Training, and less muscle loss when attempting to Lose Weight. BCAA’s are generally considered safe with little to no negative side effects. Overall, experts have agreed that consuming BCAAs can help stimulate protein synthesis, aid in glycogen resynthesis, delaying fatigue and help maintain mental function during intense exercise. Many scientists also consider BCAAs, especially Leucine, as the primary activator of muscle protein synthesis out of all the amino acids. Considering BCAAs are catabolised to a great extent during exercise and their strong ergogenic capacity, it makes sense to involve BCAAs in a well rounded supplementation routine.

Among the eight EAAs required by humans for optimal health, the BCAAs consist of Isoleucine, Valine and Leucine, a key amino acid in MPS (Muscle Protein Synthesis). Generally, excess BCAAs are toxic to the body. However, during exercise and training, oxidation of BCAAs increases in skeletal muscle and its metabolites can be used to attenuate exercise-induced muscle damage, increase MPS and in energy production pathways (refer to ATP). It has also been shown that small amounts of BCAAs before training is able to reduce muscle soreness. Thus, the aim is to create an anabolic hormonal profile whilst decreasing recovery time. Additionally, this is beneficial to athletes in training adaptations. To date, BCAAs are gaining popularity and is reportedly more ergogenic than protein. The effectiveness of supplementation with BCAAs only, depends on each individual’s lean mass and physiological variations such as muscle oxidation of BCAA and larger physiques would have to consume more for adequate muscle uptake. It should be noted that athletes and professional bodybuilders receive professional nutritional counselling which aids in optimising the right amount of supplement to consume to maintain an anabolic profile.

BCAAs, unlike most other amino acids, are metabolised within muscle tissue, allowing them to be oxidized (used as energy) by muscle cells to produce cellular energy in the form of ATP. ATP is the primary source of energy that fuels muscle contraction and allows you to lift weights.

The fact that Leucine, Isoleucine, and Valine are metabolised within muscle tissue allows them to be a quick energy source when the body needs it. There is a significant increase in BCAA metabolism during prolonged exercise simply because the body requires more energy during periods of stress such as training. This makes BCAAs incredibly effective when taken around workout time.

The unique metabolic processes, requirements, and versatility of BCAAs allow them to impact nearly every aspect of training.

BCAAs have been proven in many studies to be a potent performance enhancer, and as previously mentioned, BCAAs make a great energy source for working muscles because of their unique metabolism. This can have a positive impact on performance. Not only can BCAAs be used as energy themselves but they also enhance fat oxidation in glycogen depleted subjects. This allows individuals to train harder for longer without fatigue due to the higher energy demands being met. This goes for both high intensity training as well as endurance training.

Another way that BCAAs can enhance performance is through their ability to spare glycogen during training. Found as stored carbohydrates within muscle tissue and the liver, glycogen is the favoured fuel source for working muscles engaged in high intensity exercise. This makes glycogen availability and preservation vitally important if you wish to continue to train hard for longer periods of time. Studies have shown that by ingesting BCAAs before and during training glycogen levels can be spared by 25%. It is thought that the ingestion of BCAAs boosts blood alanine levels which gets converted to glucose in the liver and then sent back to working muscle to be used as fuel. This glycogen sparing effect of BCAAs will not only allow for longer more intense training sessions but also allows for faster recovery leading to a better workout tomorrow.

They are the primary determinant for how much muscle someone will build. They are what separate top level bodybuilders from the rest, elite athletes from everyone else, and cause the muscular differences between men and women. They are hormones! The hormones that are of most importance to us as serious lifters are anabolic hormones. Anabolic hormones are hormones within the body that promote protein synthesis (muscle growth), and the most notable anabolic hormones are testosterone, insulin, and growth hormone (GH). These hormones play a large role in controlling your muscle building destiny. Luckily it has been shown that BCAA intake can have a positive effect on anabolic hormone release.

Lastly, the amino acid Leucine found in BCAAs has also shown promise for increasing insulin sensitivity. Essentially, insulin sensitivity ensures that the insulin within your body maintains its effectiveness. This leads to easier fat loss, more muscle growth, and defence against diabetes.

As a natural lifter it is important to take advantage of every opportunity we get to optimise anabolic hormone levels. BCAAs are a safe and effective way to naturally manipulate hormone levels leading to greater results all around.

The effects of BCAA intake on fat loss is something that has only been explored in more recent years. Newer research is showing that BCAAs can have a positive effect on fat loss. This doesn’t mean you can eat pizza at every meal with a side of BCAAs and the fat will just melt away though. BCAAs seem to maximise fat loss when one is already on a fat loss diet. On any fat loss diet, carbohydrates will need to be lowered to some degree. It seems that BCAAs ability to spare glycogen and increase insulin sensitivity may play a role in speeding up the results of a fat loss plan.

BCAAs should also be used as a supplement during any fat loss plan because of the muscle preserving effects. On any calorie restricted plan muscle tissue loss is a serious concern that must be addressed. All of the positive effects that BCAAs have on muscle growth will also serve to protect muscle during periods of calorie restriction. It is always important to remember that anything which builds muscle will also preserve muscle.

Bulk Nutrients sell three products containing BCAAs – you can find out more about each of these products on the below links.