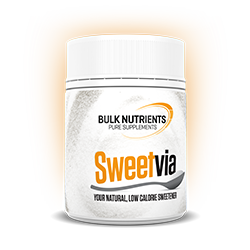 How are the Bulk Nutrients team using Sweetvia?

Sweetvia is one of the new kids on the block in terms of products available from our extensive Bulk Nutrients range. For those of you that don’t know, Sweetvia is our own formulated blend that provides you with a naturally sweet alternative to sugar that is virtually calorie free!

Since we have made our Sweetvia, we have had some questions regarding its use and how it really compares to sugar. So, we thought we would take some of the most common sugar uses and test them out. From sweetening your coffee, to creaming butter and sugar, this blog aims to highlight just how versatile Sweetvia is.

Some key points to remember about why we do apply sugar into our cooking is that it helps improve the flavour, it maintains moisture (no one likes a dry baked good), it helps maintain tenderness (ensuring food remains light and fluffy), and can even add crunch when cooked and allowed to recrystallize (who doesn’t like toffee?).

So with these things in mind, we just want to clarify that we haven’t created a new sugar, we have developed a sugar alternative which has fantastic benefits for helping you continue to enjoy your treats, without the associated guilt.

Application: Add half the amount of Sweetvia as you would sugar to your coffee (e.g. 1 tsp sugar = ½ tsp Sweetvia). Add your boiling water, milk etc. as normal and enjoy.

We Found: Sweetvia dissolves perfectly into your hot drink and provides enough sweetness to mask the bitterness of unsweetened coffee or tea.

Taste: You may notice the taste of ‘stevia’ more if you add it to black coffee instead of a milk based beverage, but this is pretty standard for all sweetener alternatives.

Verdict: We would use and definitely recommend.

Sweetening our protein shakes with Sweetvia

Application: Pour 250ml of tap water + 1 scoop of protein + flavouring of choice (we opted for cocoa) + Sweetvia into a shaker. Shake vigorously for 10 seconds to combine.

We Found: We were skeptical that it wouldn’t dissolve completely in room temperature tap water due to the granular consistency, but we were proven wrong and it dissolved perfectly!

Verdict: We certainly recommend this if you aren’t a fan of pre flavoured and sweetened protein powders. We would recommend starting at a quarter of a teaspoon first, and then adding more as required to suit your taste.

Application: ‘Creaming’ is a common baking step for cookies and cakes. It is the process of simply beating your sugar and butter together until light and fluffy. We compared a basic butter cookie recipe which is 1 cup of sugar to ¾ of a cup of softened butter.

We found: We substituted 1 cup of sugar for ½ cup of Sweetvia. We were initially concerned the decrease in volume and quantity may affect the way the ingredients combine when whipped, but it all balanced out fine and became a nice light pale colour, as creaming should. This would also be a great substitute for icing.

Verdict: We would certainly make this swap!

Application: We followed a generic Toffee recipe placing all ingredients into a saucepan over medium heat and stirred until the sugar completely dissolved. We then left it to cook until the syrup browned. Once it was golden we removed from the heat, allowed to cool and poured into cases to set in the fridge.

We Found: It’s not quite the same. By substituting sugar withS weetvia we found that it just does not ‘brown’ and become ‘caramel’ in colour the way toffee should. However, we did find that when it cools and sets, it’s firm but crumbles easily – so this could be a good substitute if you don’t like how hard traditional toffees are.

Taste: It was sweet like toffee, but it was a very different consistency.

Verdict: We probably wouldn’t use Sweetvia in our go to toffee recipe.

Application: Stew sugar and fruit until tender over a medium heat until the fruit is soft (traditionally, jam is made with equal quantities of sugar and fruit, so we went with a ratio of 1:2 Sweetvia to berries).

We found: This works great! The cooking down process with Sweetvia still resulted in a nice thick jam. We did notice that as the jam cools the Sweetvia ‘crystallises’ on the top, the same way it does in the ‘toffee’ method. To combat this, we just continued to give the jam a stir every so often as it cooled.

Taste: An extremely nice tasting jam! The sweetness of Sweetvia works well in balancing out the sourness of the berries.

Verdict: We would make this healthier swap for sure!