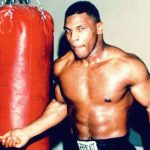 The gene pool is a funny one and when it comes to building muscle, or any sporting prowess for that matter, I’m convinced genetics plays a huge part.

When I say that, I don’t mean that anyone can’t build a great (or at least good) physique, as I believe they can, however I do think it’s important that we put “great physique” in context.

I’m a boxing fan, and I’m sure most people have heard of Mike Tyson. What you may not know about Mike is that by the time he was 16, he was well over 90kg at 5’10, lean and incredibly strong! Did I mention he’d barely lifted a weight in that time?

Another guy to look at is British sprinter  Harry Aikines. At 21 he had a huge amount of muscle, and despite an awesome chest – never trained it, as he was already “too big to be a sprinter” – it’s as if these things happen by accident!

Sonny Bill Williams is no doubt another genetic marvel, some guys simply have all the gifts, infact guys like this could likely not train at all, yet probably look better than someone of average genetics who trains very regularly.

It was said famous bodybuilder Kevin Levrone used to train half of every year at times. His genetics were so good, he’d get it all back incredibly quickly every time.

Likewise, we’ve all seen the “ET’s” in the gym and the street. Tiny arms, skinny but a little tummy that never seems to go away. Some train day in and day out and get nowhere – which admittedly has a lot to do with bad training!

Most of the rest of us (at least the ones who stick with weight training) are somewhere in the middle. As I’m naturally endomorphic, I have to work a bit harder than some, but at the same time find cutting weight relatively easy, so it seems to balance out.

The reality is that an ET doomed with the worst genetics may never be able to hold much muscle while being lean, he can either have a bit of size, while holding quite a bit of bodyfat, or be small and lean (which can be very aesthetic anyway).

These days my goals are to focus on keeping bodyfat down much more so than trying to maintain peak strength or size, however one thing that is very kind to ectomorphs is age! As we get older, it gets easier to build muscle, however bodyfat does creep up.

The reality is that even if I wanted to do everything (legally and safely) possible to pack on mass, I’d never be that big anyway.

If you read my first post you’d be aware that I took quite a rapid turn from endurance, body weight style training to more heavy resistance training just before I turned 20.

While I really enjoyed getting strong and adding muscle, my new found muscle meant I lost a lot of agility and my fitness was embarrassingly bad. I used to chuckle when people said “you look very fit” as I most definitely was not. I also had serious back pain 95% of the time, as I was too busy trying to get my squat weight up than worry about good form, and taking 5 minute breaks between heavy sets did nothing for my overall conditioning!

Unfortunately, building fitness and gaining muscle can be two opposing forces with one very often sabotaging the other. So, what’s a guy to do that needs to weight train a lot to make decent gains, but wants to maintain good fitness too?

With my weight training I have upper and lower body days, with each major muscle group being worked twice a week. The arms get hammered virtually every session, most of the time indirectly from dead lifts, rows, bench and chins.

In all the days I have two movements per muscle group with sets and rep ranges varying. I will always start with a compound movement and won’t do much assistance work. The simple theory is that a 400lb deadlift is going to work so many more muscles, applying a huge load to many body parts that cable curls and tri extensions don’t really have a purpose (in my training at least).

My days have an interesting variation with different exercises focusing on engaging the CNS and working strength and a secondary exercise focusing on Hypertrophy. My CNS exercises will generally be in the 2-5 rep range with up to 6 sets, with Hypertrophy exercises being the more typical 3 or 4 sets of 8-10 reps.

I’ll take longer breaks when doing the CNS movements but will try to keep the breaks much shorter on Hypertrophy stuff and smaller muscle groups.

The reasoning for both CNS engaging heavy training and slightly higher rep stuff is that both are necessary for muscle growth. A stronger muscle is a bigger muscle, however higher rep training also builds sarcoplastic Hypertrophy (think fluid and fullness) which some people theorise can help with strength too.

Regardless of which theories you believe, doing training in a variation of rep ranges allows you to cover both schools of thought, and most importantly creates some mental variation to training.

My cardio training is novel in that I’ll be doing as much short burst interval training as possible (utilising ground sprints or the rowing machine), with a bit of cycling thrown in. I spoilt myself recently buying a carbon fibre 8kg road bike with digital ultegra gears. Last time I bought a bike (20 years ago!) the choices were a bit more limited, so that decision alone bamboozled me.

I’m lucky to live in a place where there’s many hills, so I’ll be powering up these and cruising the down hills, in an interval style once again.

no doubt this guy is a natural ectomorph, while great for running, I’m sure he’d struggle to put on bulk

I’ve chosen high intensity cardio as I believe it much better supports my strength and Hypertrophy goals while also being very time efficient. If I start running marathons, I’ve no doubt any muscle will drop away fast, ectomorphs and lots of cardio = skinny, there’s no two ways about that.

In terms of diet, I’ll be sticking to three meals a day as I’m convinced that research has proven it’s not detrimental and I also believe less frequent eating (and therefore blood sugar spikes) makes dietary compliance significantly easier.

Apart from that, my program is all about keeping my life as regular as possible, which I think I can do, while achieving my goals. I’ll be eating a good balanced diet with at least 50g of protein in each meal, given how few I’m having.

Regarding supplements my staples are WPC and WPI as well as Creatine, however I’ll be slotting extra goodies in to see when benefits they provide.

Tune in next time to learn a bit more about my eating plan for phase 1 which is cutting. I decided that as I get back into training I’ll have those lovely “beginner” gains again, so I may as well use that time to strip off unwanted weight now.

I know from the past it’s quite taxing to “cut” and watch your strength dwindle away, so may as well get the dieting out of the way now.

FYI – my next post will see my 6 weeks into my diet with some eye opening results. I’ve long wanted to give a simple diet theory a go, and you can see how it’s worked for me.