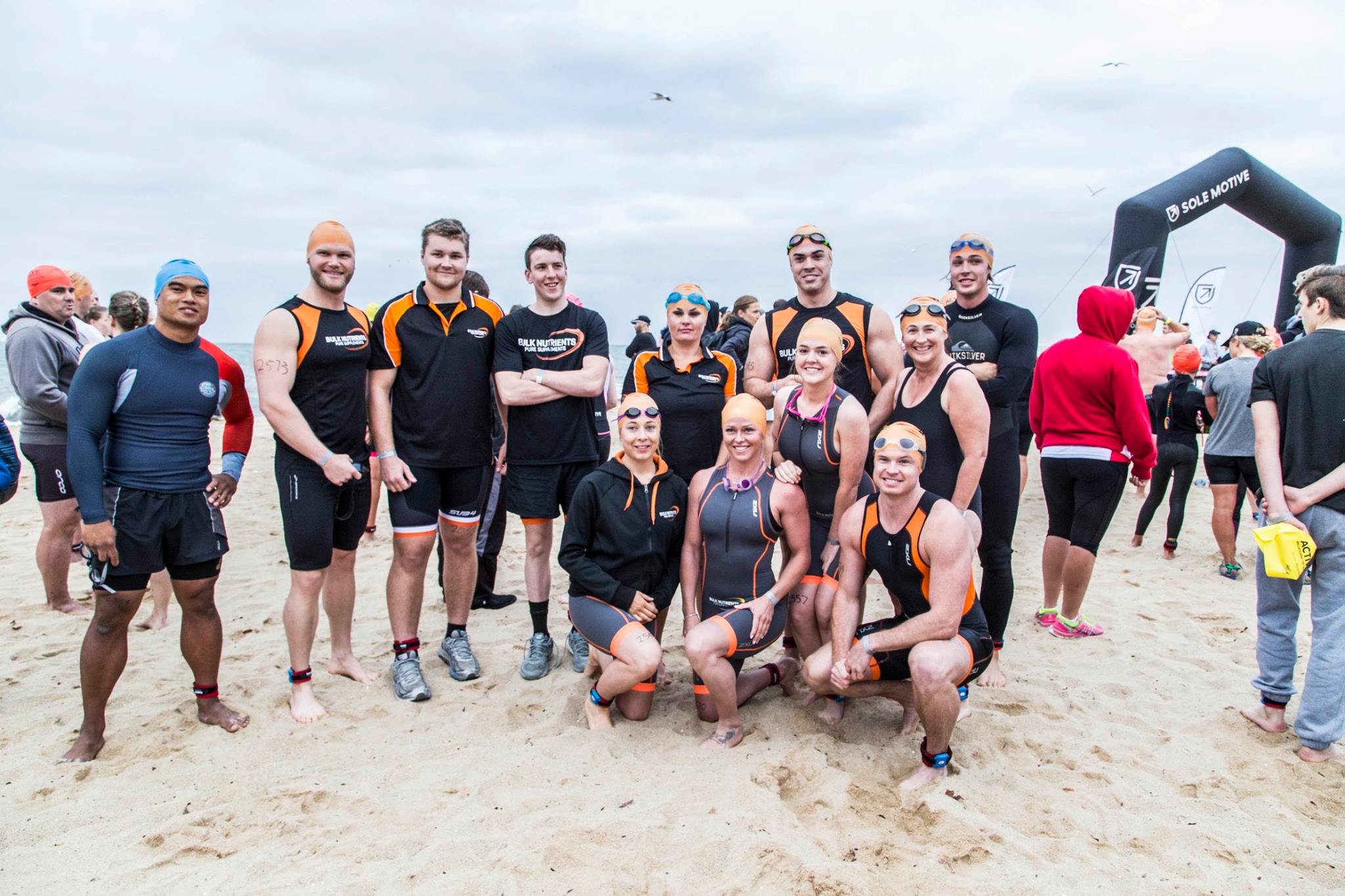 For those of you who may not be aware, here at Bulk Nutrients we aren’t just about bodybuilding shows and fitness competitions. We also sponsor a range of sports, including motocross, boxing, power-lifting and more recently we’ve broken into the world of university games, fun runs and triathlons.

For the purpose of this blog we will focus solely on the triathlons. We have a couple of staff members at Bulk Nutrients who have recently really taken to competing in triathlons. We also assembled a team of about ten staff members and some of our regular customers to compete representing Bulk Nutrients in the Sole Motive Active Tri Series in January.

For those who are unsure, triathlons consist of three sports. They include a swim, a road ride and a run completed in that order.

Triathlons come in a number of lengths. The first level is the mini, which is what the Active Tri Series offer and what we competed in.  This is a 300m swim, a 10km ride and 2km run. The next level is the sprint, which can be double to triple the mini length. Before moving up to Olympic level, half iron-man, full iron-man and three day long ultra-mans. Phew! It’s safe to say there are lengths to suit all abilities, goals and craziness levels.

We were lucky enough to receive some guidelines and  training programs in our triathlon preparation. These included programs for swimming, running and riding to ensure we trained for all elements of the race equally.

Our Bulk Nutrients team – Team Bulk – was a combination of staff members, ambassadors, bodybuilders, mums, and couples, all with different levels of ability and determination. Some of us just wanted to finish, while others wanted to give it a real crack.

Off we went to Melbourne at the crack of dawn. We had our bikes and our customised tri-suits ready. Unfortunately the water at the beach wasn’t as calm as we’d hoped for. This was probably the part I was personally most nervous about at this point.

Upon entering the water, I personally wasn’t expecting the sheer force of the waves to be so strong. There was some swell and despite considering myself a strong swimmer, the strength was off putting. At this point I stopped actively ‘racing’ and became more interested in actually finishing. I didn’t feel strong anymore.

Coming out of the water,  I was surprised at where I had finished. Myself and another colleague Brodie, had come out of the water in the front. This was quite an encouraging spot to be in, considering I’d had thoughts of calling the lifeboat while in the water.

The ride was quite difficult on a push bike, rather than a road bike. I had to push as hard as I could and people would still cruise on past me.

Moving from the ride to the run, who would have anticipated the jelly leg feeling I had. My legs felt like lead and my feet were a bit numb. I had to keep reminding myself that fortunately it was only two kilometres.

Everyone in the team finished, everyone was pleased to have finished and the experience was a lot of fun. We saw so many Bulk Nutrients suits and shirts out on the course and the Bulk Nutrients Recharge Zone we had set up was certainly put to good use.

At the end of the day, we were all pretty proud of Team Bulk.

The final event of the Active Tri Series is being held tomorrow morning in Mordialloc. It’s set to be the biggest event yet, with the Australian University Sport’s Triathlon Championships and an Olympic distance race taking place. If you’re not into competing in triathlons yourself, you should definitely consider coming along to watch.

The team at Sole Motive have a number of other running and athletic events coming up throughout the year. Maybe we’ll see you competing at Run the Rock in the Macedon Ranges or Run Melbourne.

Have you tried a triathlon yet? Give it a go. We recommend it!