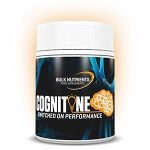 About two weeks ago, we took a stroll down memory lane, taking in the products we released in the first half of last year.  Now… we’re celebrating all the products and flavours they perfected in the second half of 2015.

Back in June 2015 we had to say farewell to two of our most loved products.  We voluntarily withdrew Amp’d X and NO3X from sale. Sad times. But never fear – before the last bottles each were sold, Rod and the team were already working hard to replace them both.

Other than that, it was crickets chirping in the R&D department (not literally, although they are a great source of protein) as the team took some time away from development to map out the coming months and come up with new ideas. I guess even geniuses need a break sometime…

Long term Bulk Nutrients customers will remember a very early product called Cognitone. It helped you ‘switch on’ and power through mentally and physically taxing tasks. Our original formula was great, but a little rough around the edges  We pulled it from sale so we could make it better… and then we got distracted and a few years passed.  Oops!

Fast forward to August and it was the month to redeem ourselves with a re-release of Cognitone after many behind-the-scenes trials. The new blend contains 14 ingredients to help you switch on when you need it. Great for uni students and athletes alike.

We said a sad goodbye to NO3X in June, but already had something special up our sleeve: NO4X! (Creative naming, right?) While we weren’t sure anything could fill the space left behind by NO3X, we were really pleased with this formula and it’s quickly become a staple for old NO3X fans.

Some of our products take many months to develop, test internally and trial externally and our AM and PM Burners were such a product. These burners help promote 24 hour weight loss with a unique morning and night time formula. Our customers have seen fantastic results from taking one of each a day.

We also released another Australian first: Beef Protein Isolate. At 95% protein in it’s pure form, our Beef Protein Isolate sure packs a punch… and um, a unique taste. It’s certainly not for vegetarians (or vegans) but for those meat-eaters who are ready to get more protein with every sip.

Making up for lost time in July, we had three releases in October.

Reaching for snacks is the easiest way to undo all the hard work you’ve put in at the gym, and we want to help with that. So we added our Protein Ball Premix to our ‘Desserts and Treats’ range. While we only launched with one flavour – a crowd-pleasing chocolate, this quick-to-make treat has been exceptionally popular.

Then we released product you’ve been asking for awhile: Phenibut Capsules! These capsules are a nootropic with no stimulatory effect, making it commonly used as a relaxant. Testing has shown clear cognitive benefits in many mental tasks.

And should we mention Salted Caramel WPI and WPC? A huge success with over 3,000 samples sent out in the first week and a half, and orders flowing in shortly after. This one is now a favourite for many, and we’ve been told never to let it go!

More unpronounceables this month, with the release of Pramiracetam Capsules! Derived from its parent piracetam (the most popular of all nootropics), Pramiracetam is estimated to be 15-30 ties more potent.

And in the quest for better-tasting ‘good for you’ items, we added a subtle amount of natural raspberry flavour to our Green Fusion, creating a tasty way to get your daily dose of vitamins and minerals.

December saw the release of HMB Capsules – HMB is a metabolite of the essential amino acid, Leucine. It is said to play an important role in protein synthesis, therefore helping muscle growth and preventing muscle breakdown.

And we couldn’t end the year without adding another product to our ‘Desserts and Treats’ category. This time it was Mug Cake! A quick and easy protein-filled, single serve cake that can be made in under a minute. It’s fair to say that lots of Bulk Nutrients customers treated themselves at Christmas without the guilt.

And that was it for 2015.  Look out for another 6 monthly wrapup during the middle of this year!