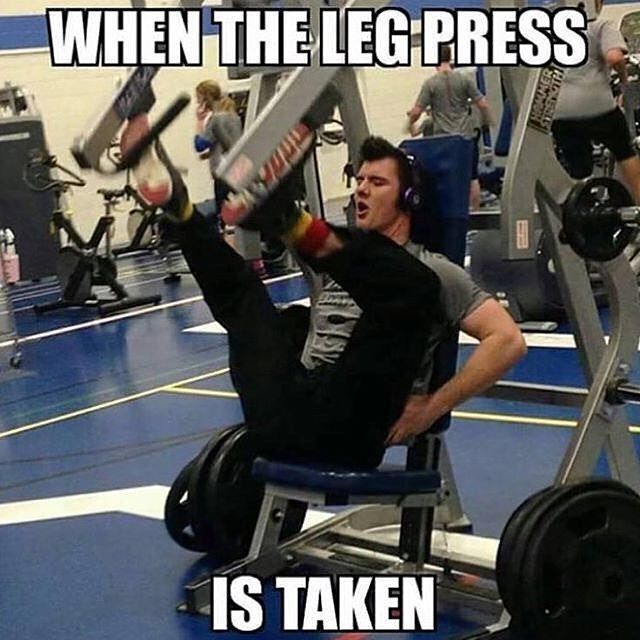 This week we’ve got a real mix of stupid questions, and we’ve gotta say that these are among the most stupid that we’ve seen so far… so hold onto your horses we’re going in!

We’re quite worried about David as he’s asked…

I think I like leg day. Is something wrong with me?

Most likely David yes. It could be a medical condition.

Leg day is hard, pushing out those heavy squats, weighted walking lunges and leg presses just to name a few. Pheww we’re tired just thinking about it! Plus it never just ends there… You end up walking like a cripple for several days after and by the time you’re feeling almost normal, it’s leg day again

So Dave, It’s really just you and Buddy the Elf who like leg day, oh and this guy.

But hey there’s nothing like seeing some serious gains in the leg department!

Too many ‘curl bros’ neglect their lower body entirely by focussing solely on training upper body (usually arms) and then end up looking way out of proportion.

Embrace your love for leg day Dave! Not all of us have it!

Just for sending in your question we’ll throw a bag of your favourite protein your way, that’ll certainly help leg day recovery.

Do the Romanians only do Romanian dead-lifts?

Hmm but Ronald, since they’re Romanian, don’t they just call them dead-lifts?

Now now, we’re getting a little stereotypical here aren’t we. We’re quite sure that they don’t only do dead-lifts but perhaps they are best at the Romanian dead-lift.

You’ve really intrigued us with your question here Ronald, so much so that we’ve even done some research!

It turns out that the Romanian dead-lift was named after record holder and Olympic and world champion Nicu Vlad of Romania. Now if that’s not a Romanian name we don’t know what is.

Anyway, Nicu Vlad performed a lift that was neither a stiff-legged dead-lift or a regular dead-lift and that’s how the Romanian dead-lift came into being.

Well, there’s a little story for ya Ronald!

Ryan, on the other hand, is afraid to stop taking selfies…

Did you really go the gym, if you didn’t upload a selfie to social media?

We are wondering this question ourselves, Ryan. Is it really worth putting in the hard yards if no one knows you did it?

Hmm, we aren’t sure… we do love a good gym selfie.

However, you’re putting yourself in danger of being classed as a ‘gym douche’ by taking constant gym selfies. Y’know what we’re talking about here. Another trait of a gym douche is spending a copious amount of time staring in the mirror and taking selfies because hey that bod needs to be seen, right?

So perhaps a gym selfie every now and then is a better compromise than one after every workout. Because let’s be honest, uploading a selfie after sweat sesh is really going to clog up your Instagram account (not to mention people will think you’re super self-obsessed and even if you are, they don’t need to know that). Or alternatively just Snapchat or Instagram Story your selfies!

Here’s some tips on how to get mass media likes on your selfies.

Anon Anon (such an unfortunate name) has asked…

Who is Anon? I’ve noticed they’ve reviewed EVERYTHING on your website. They can’t have tried that much of your range surely…

We were thinking the exact same thing Anon Anon! We have no idea who Anon is either! It’s quite peculiar really.

Sure, we’ve got our fans but this Anon is clearly quite obsessed, writing up countless reviews on the same product often with different opinions! It’s real madness.

Perhaps you could help us out? I mean your name is Anon Anon, maybe you’re related?

We’d love it if you did do some investigating. That’d be ace!
Finally, we’ve got Matt’s question…

If I do cardio after weights, will the blood be redirected from my arms to my feet, causing me to lose my gains?

There is always a risk of losing gains when you add cardio into the scenario. Cardio is a gains thief!

We aren’t sold on the science you’re giving us there but consistent long periods of cardio (usually doing the same thing) often results in the body not changing.

However, it’s heavily debated as to whether the combination of weight training and cardio helps or hinders muscle gains.

One way you can ensure no gains are lost through cardio is by keeping it short by doing a HIIT or Metcon session that gets your heart rate up.

Interval style training is great for preserving muscle whilst burning fat so we’d recommend you check it out. It’s hardcore and should be very taxing but it’s over in no time and can be more exciting than jogging on the treadmill for 30 minutes, right?

And that’s a wrap!