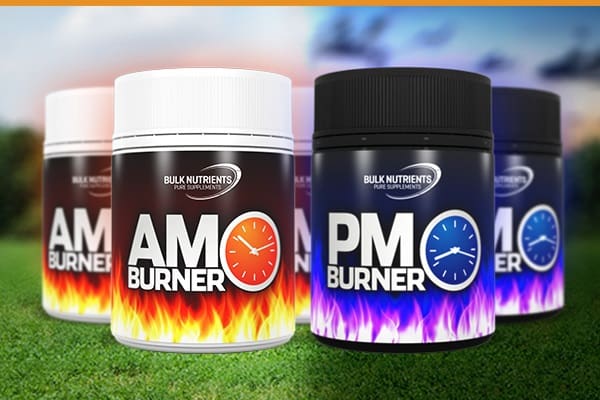 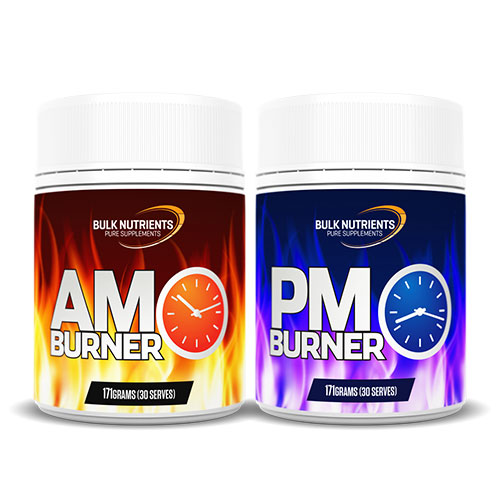 Over the last 12 months, Bulk Nutrients has been researching key ingredients for fat burning powders, which are both proven to be effective based on clinical research and are suitable to be used in a water based formula.

Our in-house team, as well as a biochemist we work with on a regular basis, conducted the research. The only restrictions we put on our research were that ingredients had shown efficacy in weight loss trials and a greater emphasis was placed on those ingredients showing multiple benefits in human studies.

We're very excited to introduce AM and PM Burner as a result of this research.

Our AM and PM Burner range consists of two products, the AM Burner being a product which includes mild stimulant action (which is suitable for day time use) and our PM Burner which eliminates the stimulants whilst including a blend of ingredients which can assist with relaxation, mood and the suppression of hunger (perfect for night time use).

For an effective fat burner, we have always considered a “multi angled” approach. Weight loss factors cover some broad areas, which can be categorised as appetite suppressants, satiety enhancers, thermogenics (increase caloric expenditure) and fat mobilisers (which promote the use of body fat for energy).

This article is a detailed look at which ingredients we used and the dosages selected. Please note, that while larger doses were often used in studies, due to ingredient synergy and similar action of many, it was concluded that lower doses were more appropriate with some ingredients in our formulas.

What is in AM Burner? 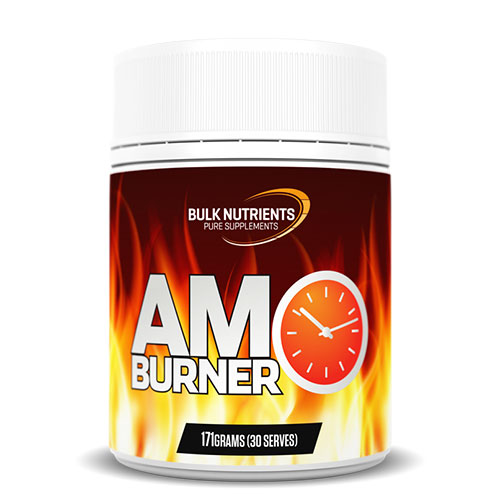 Acetyl L Carnitine has been used in many forms over the last 20+ years, and would have to be one of the most popular “bases” of a good fat burning supplement. It has been suggested that this amino acid has a direct affect on thermogenesis and assist the body utilising its fat stores for energy.

On a cellular level, the presence of Carnitine in the form of supplementation does induce enzymatic changes that do make the potency of the beta-oxidation pathway increase when paired with exercise.

A slight trend towards fat oxidation after exercise (as assessed by respiratory quotient) has been noted by those conducting this research.

The active ingredients of Green Tea Extract are cathechins., with the most potent being ECGC. These are said to work by increasing energy expenditure as well as direct fat metabolism effects.

Green tea extract has received significant attention in human subjects over the last 2 decades. Two separate literature reviews (Thielecke and Boschman, 2009; Rains et al., 2011) assessed a combined 20 publications, all of which were in agreeance with increased resting energy expenditure, with over half also reporting increased fat utilization as an energy substrate and decreased body weight.

Studies utilised dosages of up to 1200mg of catechins and up to 1200mg of EGCG, however the average dosage amongst the surveyed studies is approximately 300mg EGCG, with higher doses not correlating to further increases in energy expenditure.

While the first two studies relate to weight loss and direct effects on fat oxidization, the last study relates to lowering of LDL levels, another significant benefit of green tea extract.

The dose used in AM and PM Burner is 250mg, please note we use a very high ECGC content Green Tea Extract.

Quercetin is a Bioflavonoids found in fruits and vegetables, but highest levels are found in apples and onions.

Like many other bioflavonoids, Quercetin has anti-oxidant, anti-artherogenic, and anti-carcinogenic properties. Quercetin is also neuroactive, with some of the same abilities as Caffeine but less potent.

The real benefit of the addition of Quercetin to a fat burning formula is not due to quercetin action itself, rather its interaction with other ingredients, particularly green tea extract where it is said to greatly increase absorption. Quercetin has also demonstrated some marked performance improvements when combined with green tea and caffeine, which have been replicated in multiple studies.

While a very expensive ingredient (which is why its very rare in fat burners) we feel the inclusion of Quercetin in both our AM and PM Burner yields a much more potent formula. It Increased bioavailability and decreased methylation of green tea polyphenols, and had a Direct effect on fat gain when high fat diets are consumed with animals.

The dose of Quercetin in AM and PM Burner is 250mg

Although caffeine has been widely studied in many contexts and it is a compound most people are very familiar with (and take every day), a number of studies have focused on caffeine and weight loss in humans, most of which are relatively recent.

A recent review by Heckman et al. (2010) highlighted the safety and efficacy of using caffeine as a weightloss aid, as well as in CVD and Diabetes type 2. Dulloo et al., (1989) reported a 109 and 78kcal/day increase in energy expenditure in lean and obese patients respectively administered 600mg caffeine.

The following studies report the benefits of Caffeine for different functions.

Please note, the dosage of Caffeine in AM Burner is 150mg

Forskolin is a more recently discussed and tested ingredient, it is suggested it increases cellular levels of an enzyme called cyclic adenosine monophosphate (cAMP).

Elevated cAMP levels have been shown to be associated with increased rates of fat loss, and can also improve the effects of other fat burning compounds.

Forskolin is still being researched for its effects on testosterone and fat loss, but initial research results are promising.

There are several preliminary reports that have examined the effects of forskolin on body composition, mostly in women, with success.

It has been suggested forskolin also has a positive effect on testosterone (Valenti et al., 1995; Valenti et al., 2001), Godard et al. (2005) supported this notion with evidence.

The studies by Godard et al. (2005) utilised 250mg of 10% forskolin and reported an increase in testosterone and decreasing bodyfat percentage as well as fat mass. Forskolin has limited evidence however the evidence does suggest it to be effective in reducing body fat percentage.

The dosage of Forskolin in AM and PM Burner is 50mg, however as we use a 20% version, the active constituent levels should be identical a 10% version at 100mg.

Chromium’s main mechanism is directly tied to chromodulin. Chromodulin, a protein, normally augments the hormonal response to increased glucose levels in the bloodstream. If this protein is impaired, the ability for these hormones to work in the body is greatly reduced.

The effects of chromium picolinate have been widely studied. A number of randomized, placebo-controlled, double blinded trials exist which suggest a slight decrease in bodyweight in chromium supplemented groups, as shown by a review by Pittler et al., 1999.

In a systematic review of chromium supplementation from 36 randomized controlled trials, Balk et al. (2007) found that lipid metabolism was not significantly effected, however fasting glucose was lowered in chromium supplemented groups. Another Study worth noting is demonstrates the effect of chromium on food intake and cravings for food.

The dosage of Chromium used in AM and PM Burner is 1mg (1000mcg) a similar amount to that used in studies.

Synephrine has shown to decrease energy intake and energy absorption, as well as increasing metabolic rate.

It is a beta agonist, so works via increasing lipolysis.  Synephrine also has alpha-adrenergic antagonist capabilities. Affecting both the A1 and A2 receptors, albeit with a different potency.

It is said to have similar, but more mild effects to Ephedra, which is not available in Australia due to safety concerns.

Rather than having a direct effect on weight loss, Glucommanan Fibre has an effect on satiety (feeling of fullness) as well an improvement in glucose uptake and cholesterol.

Many users have discussed the fact Glucommanan Fibre makes them feel “full”, possibly due to its water attracting capabilities and usage as a thickener – it expands as it makes contact with liquid.

The studies below do not only show Glucommanan Fibres direct affect on reducing cholesterol, effective weight loss and satiety, but also cover other important factors, which would likely contribute to weight loss, particularly when combined with ingredients that have a direct action.

Seaweed has long been a regular part of the Japanese diet with an average dose of 5g consumed daily by Japanese citizens. While the health benefits of seaweed extract and its active constituents such as fucoxanthin are not fully understood, it is suggested that, amongst other benefits these are effective for weight loss and weight management.

A daily dosage of 2.4-8mg fucoxanthin has shown benefit in some human studies over a prolonged period of time, and while within this range the benefits are dose-dependent higher doses have not been tested sufficiently.

Study on women over 16 weeks demonstrating weight loss, reduction of liver fat and a substantial increase in base metabolic rate, as well as reduction in blood glucose.

What is in PM Burner? 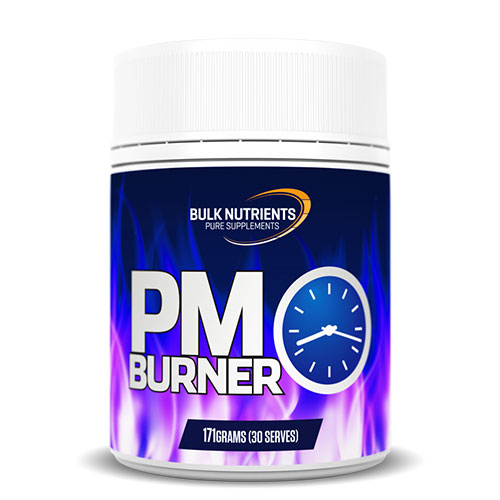 The ingredients detailed above are used in both AM and PM Burner, with the exception of those which have strong stimulatory action, caffeine and higenamine.

As many users find such ingredients can prohibit sleep, we have omitted these while adding the following ingredients, which we feel have good functionality in the PM Burner.

L Trytophan is a compound which gets converted into serotonin when in the brain.

Serotonin is one of the principal neurotransmitters involved in happiness and anti-depression, and the theory is that when these levels are adequate (or enhanced from baseline) a feeling of satisfaction will be met.

As feeling satisfied and not yearning for food is a large part of weight control, L Tryptophan has a significant purpose here.

The following research looks at the use of L Tryptophan in weight loss and appetite suppression.

The dosage of L Trytophan used in PM Burner is 100mg.

Purchase the AM/PM Burner Bundle and Save!

Want to try a Bulk Nutrients product for free? Click here to request a free sample!