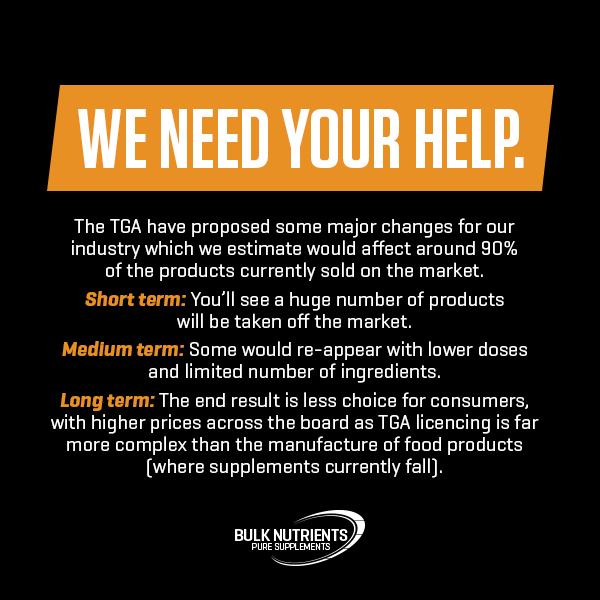 *Please note we have updated this blog on 27/11/19 after noting the FAQ’s uploaded on the TGA website (as of 26/11/19). While we appreciate more detail, some of the questions posed, and the answers given conflict heavily with two key documents that have been provided by the TGA thus far. This is noted where relevant below.

The first point is we have no issue with a change in legislation. We are a professional company who takes health and safety very seriously, as well as compliance with our HASTA approved range. We are an audited company regulated by the TDIA that regularly receives an A rating from our audits. We take exception with companies making dodgy claims and taking short cuts with products, evidence for this is the effort we went to in exposing the Power Supplements scam six years ago (both publicly and directly with legislators), where their products and at least six companies they made products for were severely underdosed (they were cutting their protein at approximately 50% with maltodextrin).

To this day we conduct hundreds of tests a year on our own products and publish protein tests on our website. There are over 250 tests published on our products all batch numbered and flavoured so the public can identify them. In addition to that, for the last six years we have offered access to NMI laboratories for anyone wanting to test another company's products – free of charge. This service, which we pay for, (but have no hand in the chain of custody) keeps companies honest, holding the questionable ones to account via their own customers (if their products fail).

All of that said, we have a distinct issue with this TGA legislation, as proposed. What is being proposed will see Australia’s standard and systems at odds to the rest of the world, and when you break down elements, we think it’s very unlikely that any supplement user would support it, as it is so restrictive, while not addressing safety.

"Not supporting the proposed legislation is very different to saying the industry doesn’t need change."

The best analogy I can use is Sydney’s lockout laws. There were many people who were very concerned about the deaths which had occurred in Sydney due to the abuse of alcohol and believed something needed to change.

These people did not think the heavy-handed responses (lock out laws) was a suitable solution to the problem, but they still had concerns for safety. The lockout laws had significant far reaching negative effects, just as this legislation will do here, and there are arguably far more effective ways to deal with safety issues.

Yes, there are issues that need to be fixed, Bulk Nutrients does not believe that the proposed legislation addresses it in an effective way, I will go through examples one by one. Please note, the issues are not limited to what I am suggesting. These are simply examples, of which there are many.

The proposed legislation will remove all ergogenic claims from foods, ie “build muscle” and “improve recovery”. There are hundreds of studies which demonstrate the link between protein powder and these functions. We do not think it is reasonable that the use of these claims means a product becomes a “therapeutic good”.

In the TGA draft legislation page 4, section 2, column 3, viewable here it suggests that is exactly what will happen.

If that confuses you, consider this: Kelloggs Special K cereal is advertised as "feeding endurance, feeding strength, feeding recovery" as part of its #poweringyou campaign. It is also described as "contributes to maintenance of muscle mass."

Under the proposed changes, this breakfast cereal product would be captured and therefore need to be registered as a therapeutic good to continue to describe the product in those terms!

*Note due to the inconsistent information presented from the TGA thus far, this is the most confusing part of the potential changes.

As proposed in the draft and report by the TGA, any nutritional product in which doses or ingredients fall outside schedule 29, and schedule 2.9.4 will become a therapeutic good.

Case study 2 on page 10 of their report is very clear about this.

In that example the compound Choline is used, but here we will use an example of Leucine (also listed and limited in schedule 29).

In both schedules the dosage limit of L Leucine is 490mg. As a comparison that is 1/10th of the amount naturally occurring in a 250g steak and approx 1/8th of a typical dose of whey protein. This means any BCAA product dosed at more than 2 grams would become a therapeutic good. Virtually every other amino acid has a similar restriction, which would render any BCAA and EAA based product (at a dose of more than 1g) as well as free form Glutamine will become a therapeutic good.

Inclusion of ingredients like Beta Alanine, Citrulline Malate, AAKG and virtually any stimulant apart from caffeine in any amount at all may mean a product is “non-compliant” as a food, which means it is a therapeutic good.

Schedule 29 covers a total of 49 vitamins, minerals and amino acids, so literally the inclusion of any nutritive substance not listed here may mean a product is a therapeutic good.

Do we want any supplement which is categorised as a supplementary sports food to be limited to 49 ingredients in tiny doses?

While multiple documents are available offering conflicting information from the TGA, we will pay particular attention to the documents with the most severe outcomes.

Restrictions on anything encapsulated

BCAAs, Arginine, Tribulus, etc are very well-known ingredients with decades of use and safety information. The use of these and any ingredient in capsulated form would, by default, become a therapeutic good.

We think it is perfectly reasonable that commonly used ingredients in capsulated form are packaged and sold as foods. Ironically, for dose sensitive ingredients – where there are concerns for safety, encapsulation makes the process simpler and safer for a user as the dosing is metered per capsule, as opposed to needing to weigh 100mg of powder (which can easily be misjudged with disastrous consequences).

A vital point which is not getting much airtime is noted at the bottom of page 185 in the Copper report from 2018, which the TGA heavily references in their analysis.

Cooper conducted a study into the supplement industry analysing 112 supplements bought at retailers and online outlets throughout Australia. In this report it was found that 6 of the 112 supplements sold on the Australian market contained banned androgens, which were not listed. While the doses were very small this is a concern for people both for health reasons and potentially failing a drug test, every supplement which failed was made overseas.

This is the exact report which is heavily referenced as to why our industry needs fixing, yet the massive effects will be on local manufacturers, not those products which are imported.

It would be the equivalent of when the Chinese authorities found melamine in local milk products then deciding to ban imported milk. We feel that if non-compliance and inadvertent doping is an issue with imported supplements, then customs / border issues need to be a major factor.

There is no mention of this in the proposed legislation from the TGA that border security and imported supplements would be a focus.

Lack of consultations with industry leaders

Another point we need to make is that industry really hasn’t been consulted here. Us (Bulk Nutrients) and one other supplement company were only two industry players I am aware of, who attended a round table talk with legislators, health experts, politicians, the CSIRO etc last year. We travelled from Tasmania to attend this. This was a discussion on the industry and potential changes. While we weren’t able to have a lot of input that day, we raised some important points and asked that we continue to be involved in any kind of continued industry / public consultation.

The only consultation we had between now and then was information on rescheduling of caffeine powder (which we agree with) and then this. None of this involved the experience of industry and consumers in drafting the changes, instead we have a very short window to respond.

We hope that this process is extended and that industry is given the opportunity to be consulted more. We also hope that any changes to the TGA’s jurisdiction are done while schedule 2.9.4 (which is under foods) is revised to reflect current conditions, which include a far wider array of ingredients and suitable doses, consistent with other international codes.

This issue with therapeutic goods vs foods

Cost of business and bureaucracy in Australia is already high. The TGA regulates medicines and medical devices, so effectively we are viewing what used to be foods as medicines. We live in a world where markets are not isolated and every Australian company is competing against imports. If manufacturers of supplements made here are classified and restricted to a level which is completely inconsistent with the rest of the world, it will mean the playing field is stacked way against us.

This will affect Australian companies’ ability to export overseas (as they bear much higher costs and complexities) and will mean there is a huge incentive for individuals to import low cost, unregulated supplements from overseas. We already know that customs are very poor at border control due to resources, approx 10% of goods are inspected.

Locally, it means far less choice for consumers and in many cases where dosing is simply reduced it will greatly increase chances of misdoing – imagine the scenario where people figure locally labelled supplement doses need to be quadrupled to be effective, as their labelling is restricted due to tiny doses allowable as foods.

For consumers that like to support Australian manufacturers, they will have to pay a much greater premium to what they do currently. For others it will mean far less choice overall and ineffective supplements which contain few key ingredients, finally for many it will mean running the gauntlet and purchasing “non-compliant” supps online overseas – hoping they get through.

Australian retailers will be stuck in a very difficult situation as to what they sell and how compliant they are.

Please note we have edited the section about the “transition period” now more information is at hand. As per the TGA’s FAQ’s “will suppliers have to stop selling products”. A 2-3 years transition period has been suggested. We applaud this suggestion and believe it will greatly assist the changeover for manufacturers, retailers and importers.

Past incidents regarding supplementation and safety

As a final but sombre word on safety, it needs to be understood what promoted the changes. The TGA references two very unfortunate incidents in their report.

The first incident was a death on New Year's Eve in 2018 where a gentleman accidently consumed around 3000mg of caffeine. (it was reported he poured caffeine into a protein shake after a night out).

There is a separate act to restrict the sale of caffeine in powder form which we support, however the proposed legislation we are discussing above is separate to this.

The second incident which resulted in death occurred in June 2017 where a woman from WA preparing for a bodybuilding show died. After her death, it was reported her family found out she had a rare genetic disorder - known as Urea Cycle Disorder - which meant her body didn’t break down protein properly.

While absolutely tragic, a genetic disorder like this is extremely rare and could be triggered by any protein source, ie fish, meat, milk etc. In this case it happened to be protein powder. There is no suggestion in the proposal that a mandatory warning for potentially pre-existing urea disorders is made on protein powders. Given that, we can’t understand how the proposed changes would prevent an incident like this.

If you want to read our public response to the TGA's proposed changes you can check it out here and show your support here by directly getting in touch with the TGA and expressing your concerns.