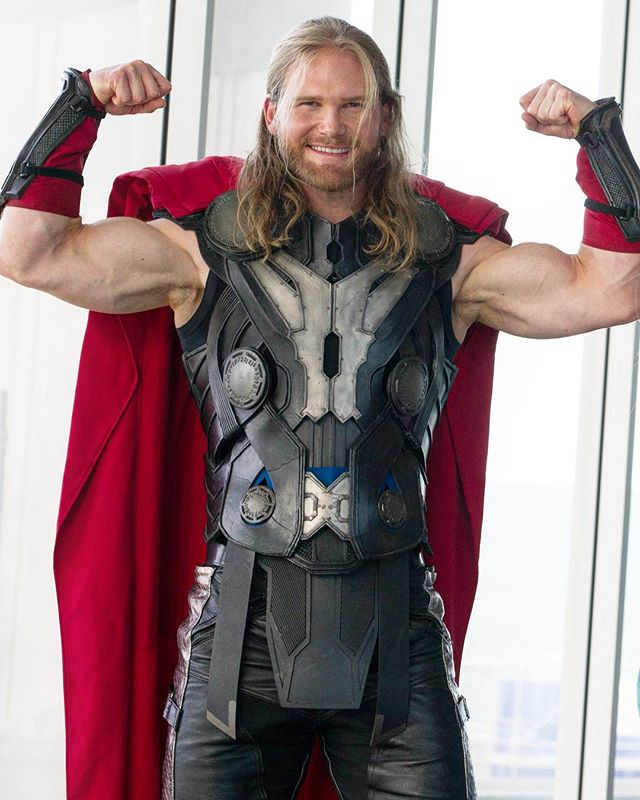 Here are my essential exercises for him and her, athlete and non-athlete, god and human.

I’m often asked “What exercises are best for strength and muscle gain?”

Throughout my 14 years of weight training, I can honestly say that no other exercises have helped me develop strength, muscle and functional movement quite like these four exercises – Barbell Squats, Dead-lifts, Bench Presses and Chin Ups (or Pull Ups – there are many variations with grips and widths on both).

These four movements are a necessary must, in my opinion. Whether you’re looking to obtain that “Superhero” physique, increase functional ability or increase/maintain your general health and well-being, they should all be implemented in everyone’s training program.

No matter what the experience level of a trainee, Barbell Squats, Dead-lifts, Bench Presses and Chin Ups can all be programmed safely and effectively (even if slightly modified where necessary) to increase one’s health, strength and capabilities. In fact, I never feel quite right if I am not performing these movements as part of my regular training program.

It’s well researched that greater levels of testosterone and growth hormone will be produced by the body when large compound movements are performed. These are the hormones responsible for optimal body function, keeping us healthy and happy. This is why I focus on coaching my clients to give them the ability to execute these movements, as it is so important for their general well-being.

Don’t be fooled by the “Loki’s” in the gym. You might see them performing set after set of concentrated bicep curls, triceps kickbacks or side lateral raises. Sure, these movements all have their place, however “isolation” exercises such as the ones just mentioned are less likely to train the body adequately to perform some of our most basic daily movements. Movements like bending down to pick up an item off the floor or reaching overhead to retrieve someone off a shelf. Oh, and did I mention those isolated exercises are less effective in burning fat?

So let’s take a look at why Barbell Squats, Dead-lifts, Bench Presses and Chins Ups are just so great….

When performing Barbell Squats, a person will work the primary target muscles including the Quadriceps, Hamstring and Glutes.

These groups of muscles span over three  separate joints in the body (six to be technical). While the Quads, Hams and Glutes do most of the heavy lifting, many other stabilising muscles throughout the entire body are recruited. These include muscles making up the core, which is of utmost importance.

Like Barbell Squats, Dead-lifts will focus on the Quads, Hams and Glutes. They again recruit many other muscles in the body with additional focus on the back, chest, shoulders and arms.

In fact, just about every muscle in the entire body is used when performing this movement, especially if you’re lifting some decent poundage and can’t avoid pulling a dramatic face!

Image taken from @thorbjornsson aka ‘The Mountain’ on Game of Thrones’ Instagram account. Here he is dead-lifting over 450kg.

The Bench Press is a movement which involves both the shoulder joint and the elbow joint, generating significant upper body power from the chest muscles.

The deltoids are also actively called upon which assist in the ability to move more weight and control the movements.

Stabilizers are also extremely important in this lift, requiring the lifter to maintain a tight core, and engage the glutes which will also assist in posture and technique throughout the entire range of motion.

The added benefit of Bench Presses is the stimulus placed on the secondary muscles used – The triceps. Making up most of the muscle of the upper arm, triceps are important for everyday “pushing” movements.

Again, crossing over both the shoulder joint and the elbow joint, the back muscles and deltoids will generate the most force through the Chin Up movement.

The glutes should be engaged through the movement to stabilise the body (to stop it from swinging) and keep the lifter in the correct position throughout the movement.

Chin Ups are great for posture, particularly if your day job involves sitting and/or computer work and assisting with those “pulling” movements which we do each and every day.

They will also stimulate the biceps, and let’s be honest, we would all like a little more size on our arms, right?

That’s a very general overview of why Barbell Squats, Deadlifts, Bench Presses and Chin Ups are so important in any fitness regime. If you're keen to start programming them in your gym routine, take at look at the second blog in this series: Programming Thor's Four.

This blog further breaks down each movement, focuses on the correct technique and outlines how you can incorporate these movements in your training.