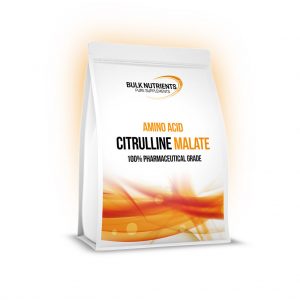 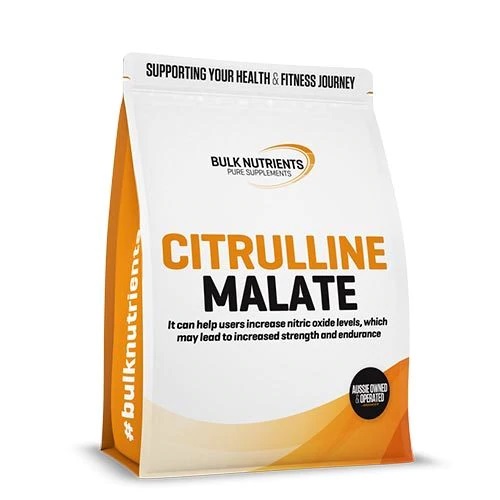 Citrulline Malate is a pre cursor to Arginine. Citrulline Malate can help users increase nitric oxide levels, which may lead to increased strength and endurance through the increase in blood flow, glucose uptake and oxygen delivery to the muscles.

Bulk Nutrient's Citrulline Malate is the more powerful 2 – 1 form and is 100% pharmaceutical grade.

Can be used with:

Citrulline Malate is classified as a non-essential amino amino acid and as such is not traditionally incorporated into proteins or nutritional/infant products.

Citrulline Malate is produced in the body through two main pathways:

Citrulline is a component of the body’s urea cycle, which is responsible for converting ammonia to urea. Ammonia is a toxic product of exercise that inhibits muscle contraction when exercising at high intensities such as in the gym when doing any type of set with greater than 6-7 reps.

There have been numerous studies on Citrulline Malate which have measured its effect on a range of different exercise and muscle performance parameters.

One study showed an increase in plasma N.O metabolites in well trained endurance athletes after a cycling competition; these athletes were supplemented with only one dose of Citrulline Malate (6 g) 2 hours before exercise.

Another study using rats have found supplementation with Citrulline Malate to improve the efficiency of muscle contraction.

So the science is pretty solid when it comes to Citrulline Malate’s positive effect on exercise performance.

A deep dive into the research

A study of people looking to use Citrulline Malate to increase the intensity of their resistance training program was published in 2010 in the Journal of Strength and Conditioning Research and used repeated sets of Chest exercises to muscular failure to test Citrulline Malate’s capacity to improve anaerobic performance.

The study was of the highest scientific standard possible; it involved 41 male subjects and used a randomized, double-blind, 2-period crossover design. In simpler words, this type of study design is considered the ‘gold standard’ in science.

Each time, the researchers recorded the number of repetitions conducted in the 8 sets of flat barbell bench presses (i.e. 4 at the start and 4 at the end)

In what can be considered very encouraging findings, the number of repetitions showed a significant increase from placebo treatment to Citrulline Malate treatment.

By the time participants reached the last set, there was an average increase of 52.92% in repetitions, with every participant showing a positive response! What’s more, participants reported an average decrease of 40% in muscle soreness at 24 hours and 48 hours after the Chest training session when supplementing with Citrulline Malate prior to the workout.

Citrulline Malate is one of those rare ingredients with a very solid backing in clinical studies.